I spent a very frustrating afternoon in the Deeds Registry in Wakefield trying to find out more information about our property.  I had high expectations, but it wasn’t to be.  Last time I did some research on local history, I got a result in 30-40 minutes. But this time, I spent all afternoon and got nowhere.

From the census, I knew that at least one of the properties was occupied by Hobsons from 1851 through to 1911 (which is the last available census).  We had already found the Hobsons gravestone in Honley Cemetery, so I was assuming that they might have owned the property.  But alas no.

I searched under the names of the other occupants that featured in the Censuses, but again no luck.  So I can only surmise that the occupiers did not own the property, but rented them (don’t forget that they are organise as three separate cottages).

Time to change tack.  In 1910, there was a national land survey conducted to establish who owned each plot of land in the UK.  We quickly found the appropriate map in the archive.  Luckily, the map we were looking for was there – the Archive do not have copies of all of the maps.  The map shows that all the cottages and the land surrounding it is owned by the same person – referenced on the map as “1010”.  Unfortunately, I then ran out of time before I could look up the reference number in the catalogues.

Ho hum.  It will have to wait for another day.  But at least we do know that all the cottages and the surrounding land were owned by a single person in 1910.  It is a start.

PS The staff in the Registry of Deeds are really helpful and sure know their way around.  More information here: http://www.archives.wyjs.org.uk/archives-wakefield.asp.  Check the opening times if you want to visit (it is closed at lunchtimes 1-2pm) and I would suggest making an appointment before visiting.

When I was looking into how old the property was, I used some of the old maps in the Local History Unit in Huddersfield Library.  I have a photocopy of the oldest one that has our property on it – 1788.  The map is well out of copyright so the library was happy for me to photocopy it.

I spotted the one of the sellers had a 1:2,500 map of the area, but unfortunately our property was just off the bottom of the map.  I sent them and email enquiry if they had the adjoining map.  No luck, but I do now know the map number that I am looking for!

The vendor (Chris @ Wealden Relics.  See the ebay site here) pointed me in the direction of www.old-maps.co.uk.  This site allows you to search on a postcode and then view a number of old Ordnance Survey maps of that location.  The 1:2,500 maps are the most detailed and the most useful.  There are a number available showing our property over the years.  The maps are a little on the expensive side, but you can get a lot out of the site without having to purchase a map.

Found it!  The graveyard was a little overgrown, but this end of the graveyard seemed to have been cleared recently.  The building in the background is not the church, but the chapel mortuary – one of very few to be found in West Yorkshire.  It is boarded up and largely derelict now. 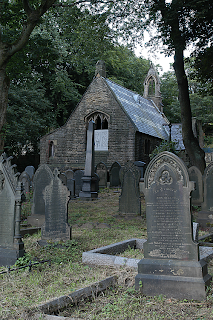 The Hobson’s gravestone is the one to the right of the photograph.  David and Mary Hobson are buried here together with their daughters Ann (Mellor) and Marian, their son Joseph and his wife Mary.

David and Mary lived in the property from at least 1850 through to the deaths in 1882.  Joseph and Marian (their son and daughter), who were both born in the property, lived there until at least 1911 (their latest census records that are publicly available). Joseph died in 1933, Marian in 1899.

Presumably reusing the plot and the gravestone saved on the costs. 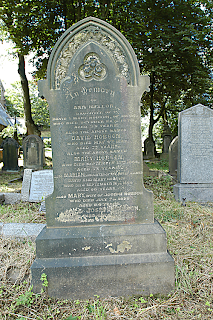 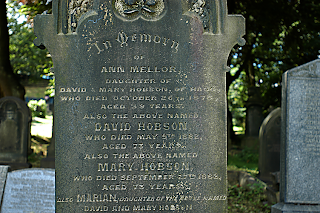 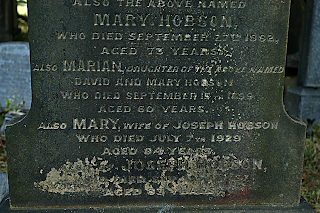 When I first started looking into how long the property was, I spent a little bit of time in the Local History Unit at Huddersfield library.  Quite quickly I established from the 1901 census that the property (10 Hagg Lane as it was referred to then) was occupied by Smith and Mary Littlewood and their three children (Ernest, Wilfred, and Denis) and a step daughter Evelyn Eastwood. Their occupations were listed as Woollen Weaver.

The property next door (9 Hagg Lane) is occupied by a 50 year old farm labourer, named Joseph Hobson. Originally, I used the microfiche in the local library to view this information, but I have subsequently accessed it online.  Although there is a charge, you can access the information from here: www.1901censusonline.com.

There is no 8 Hagg Lane listed on the 1901 census although, 8, 9, and 10 Hagg Lane are clearly shown on many of the old maps (including the 1977 OS version).  Strangely enough, there are only two properties present today number 8 and number 10, but not number 9 and number 10.  This illustrates part of the problem with using the old censuses, particularly in rural areas  – the numbering of properties is a fairly recent occurrence (since Victorian times) and it can be difficult to work out which properties are which.  For example, there are no numbers on the censuses for this property before 1891.  You have to use some intelligence and work out which way down the road the administrator was travelling as he filled in his census forms. In the 1891 census, the properties are identified as “Cliffe, Hagg Lane”.  I am assuming that the “Cliffe” refers to the bit of crag in the bottom field that can be seen from the road.  The 1851 census lists the property as “Middle Hagg”, presumably on the basis that it is between Upper Hagg and Lower Hagg.

Anyway, back to Joseph Hobson who lives in 9 Hagg Lane in 1901.  He is recorded as living in the property in 1861 as a “scholar” 16 years old with the rest of his family.  His parents are David and Mary Hobson (both born in 1809).  His father’s occupation is listed as “Farmer of 6 acres”.  His father is born in Honley and his mother in Farnley Tyas.

So the next thing I wondered about was whether I could find out where they are buried.  I had a quick look at the map and worked out where the nearest churches and grave yards where.  One in Netherthong (I know this church dates from around 1820) and another in Brockholes (dating from around the same time).  I had a quick look in both churchyards, before searching online.

A quick search online showed that there is a graveyard in Honley.  Furthermore, the burial entries have been digitised and are online.  Surely I won’t find the Hobson’s?  Bingo.  Section 30, plot 2269.

You can find the website site here: http://www.honley.ukf.net/ Although, it hasn’t been updated since 2003, it had all the information I was looking for.

Well, you know what I am going to do next – yep, look for the gravestone.